You are here: Home / orlando 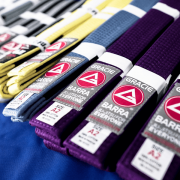 The belts in order are: White, Blue, Purple, Brown and Black. Often schools award four stripes for White through Brown belts. Black Belts then progress through degrees typically awarded one degree every three years, based on skill level, teaching ability, and contribution to the art, up to tenth degree. There are special classifications for Black Belt fighters and instructors. Instructors have Black Belts with red bands and Black Belt fighters have white bands. Typically, Black Belt instructors are not permitted to promote others up to Black Belt rank until they receive their first degree.

The ranks for children are different. Blue belt and higher ranks have age requirements so children have the following ranks beginning with White, Yellow, Orange and Green. Each belt has 4 stripes. These belts are utilized until age 16.

Brazilian Jiu Jitsu is famous for its informality and conservatism in regards to promoting students to a higher grade. This is largely due to the type of martial art that it is and the style that is used to teach it. There are few specific set “rules” about what a student should know before promotion occurs, and it is generally up to the instructor to decide if the student is ready for advancement. 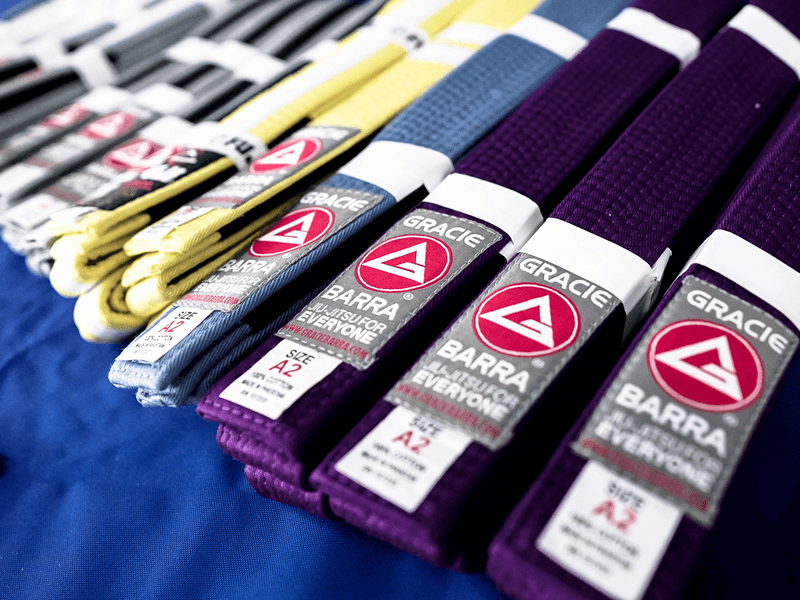 The success of Jiu Jitsu as an effective martial art is largely due to its teaching and grading methods which, as well as drills, techniques and fitness, places such a large emphasis on live sparring and associated performance in this, as well as competition. The individuals performance and skill level is one of the key foundations of grading. Therefore Jiu Jitsu is a martial art that is places an emphasis less on theory and more on performance in application of the martial art, and students are graded as such.

It is an accepted principle to never promote a student before they are of a skill level equal to or higher than others of that level that they will be competing against, this ensures that students are promoted conservatively and are representing the sport and their school/team as best as possible. This policy of conservatism is a key aspect in making Jiu Jitsu one of the most effective martial arts in sporting and real life applications.

White belt
White belt is the beginning rank for all Brazilian jiu-jitsu students.
White belt is the first belt within Brazilian jiu-jitsu. The rank is held by any practitioner new to the art and has no prerequisite. Some instructors and other high-level practitioners think that a white belt’s training should emphasize escapes and defensive positioning since a white belt will often fight from inferior positions, especially when training with more experienced practitioners.

Most academies will additionally require that a white belt level practitioner works to obtain a well-rounded skills set, with a knowledge of basic offensive moves, such as common submissions and guard passes.

Blue belt
The IBJJF requires a practitioner remain a blue belt for a minimum of 2 years.
Blue belt is the second adult rank in Brazilian jiu-jitsu. At the blue belt level, students gain a wide breadth of technical knowledge and undertake hundreds of hours of mat-time to learn how to implement these moves efficiently.Blue belt is often the rank at which the student learns a large number of techniques.

The IBJJF requires that a practitioner be at least 16 years old to receive a blue belt, thereby officially entering into the adult belt system.

Purple belt
The IBJJF requires a practitioner remain a purple belt for a minimum of 1.5 years.
Purple belt is the intermediate adult ranking in Brazilian jiu-jitsu. The purple belt level practitioner has gained a large amount of knowledge, and purple belts are generally considered qualified to instruct lower-ranked students. In other martial arts, students with a similar amount of experience are often ranked as a black (instructor) level belt.

The IBJJF requires student to be at least 16 years old and recommends they have spent a minimum of two years ranked as a blue belt to be eligible for a purple belt, with slightly different requirements for those graduating directly from the youth belts.

Brown belt
The IBJJF requires a practitioner remain a brown belt for a minimum of 1 year.
Aside from the exceptional belts awarded at the highest levels, brown belt is the highest ranking color belt in Brazilian jiu-jitsu. Brown belt typically requires at least five years of dedicated training to achieve. It is often thought of as a time for refining techniques.

The IBJJF requires that students be at least 18 years old and recommends they have spent a minimum of 18 months as a purple belt to be eligible for a brown belt.

Black belt
The IBJJF requires a practitioner remain a black belt for a minimum of 31 years.
As with many other martial arts, the black belt is the highest common belt within Brazilian jiu-jitsu, denoting an expert level of technical and practical skill. Estimates of the time required to achieve the rank vary, but all holders of this rank have thousands of hours of experience. Brazilian jiu-jitsu black belts are often addressed within the art as professor, although some schools and organizations reserve this honorific for more senior black belts.

The IBJJF requires that a student be at least 19 years old and recommends they have spent a minimum of 1 year ranked as a brown belt to be eligible for a black belt.